Hey, remember when I said I was working on a quiet book?  Well....it's still not done.  But my posts about the quiet book get a LOT of traffic (thank you!), so that encouraged me to keep stitching away! 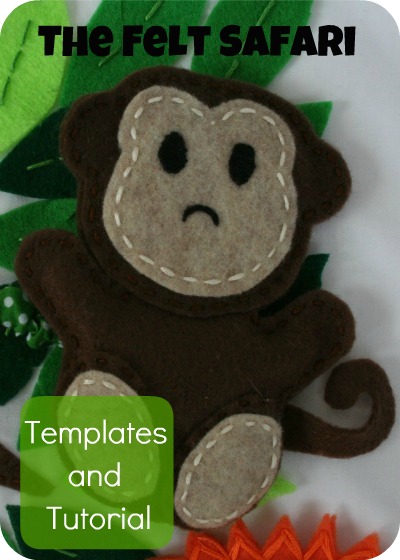 I have two pages to share with animal templates in the hopes that you won't judge me on my felt-craft laziness. 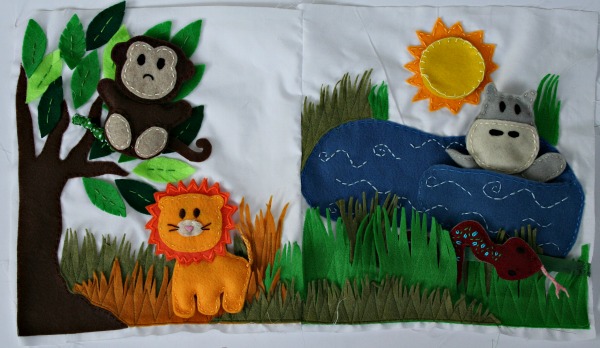 Welcome to the jungle.  The wee critters finally have a place to call home! 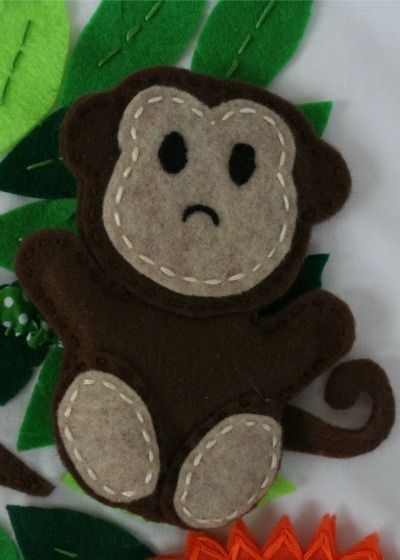 The monkey swings on an elastic-y 'vine'.  It's attached to his bum, not his hand but I'm hoping Rowan won't notice the inaccuracy. 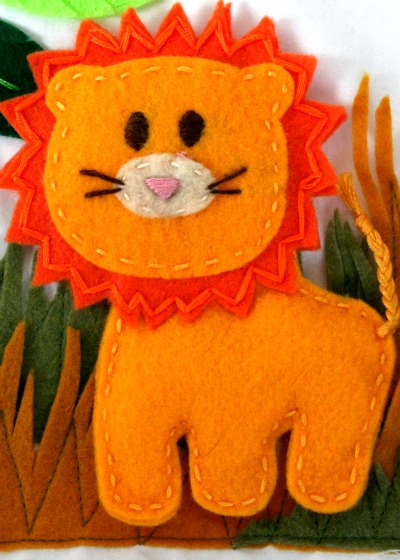 The lion is stuck on the savannah. 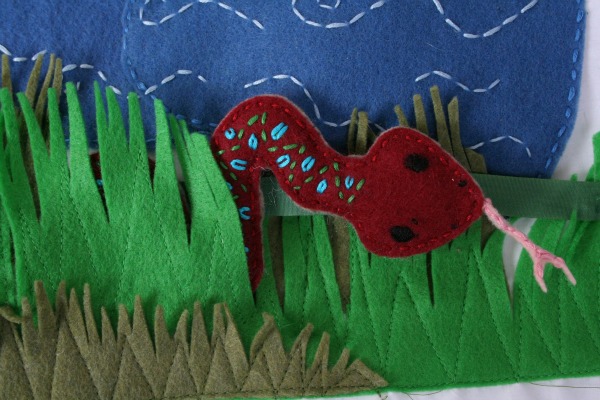 The viper (yes, not snake...viper) waits in the long grass to ambush his prey. 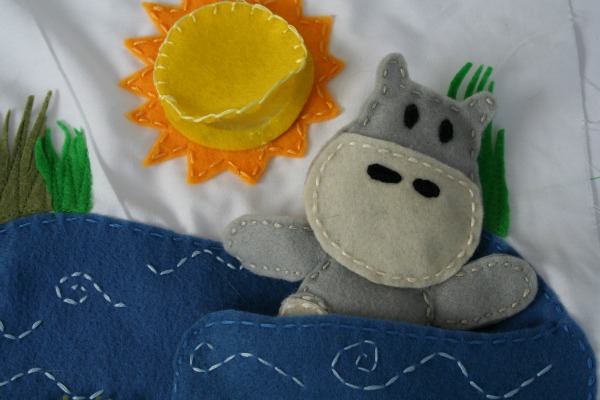 The hippo chills out in the pond. 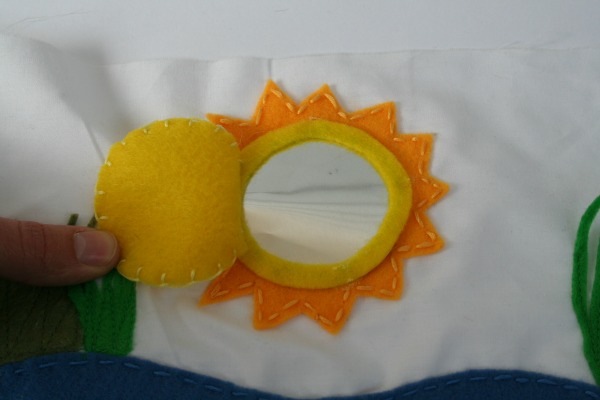 Templates for the hippo and monkey are here.  The viper and lion are here.  The files will open in Google Docs.  To print, you need to find the little printer icon on the upper left and click it.  A new screen should come up with the PDF and just head on over to 'File' under whatever internet browser you're using and select print from the drop-down menu.

Now, let's talk about construction.  Basically, the rule is embellish first, sew second.  This means that any facial features, tails, or decorative stitching should be sewn on before sewing the animal together.  Limbs or tongues should be also completed before sewing the body. 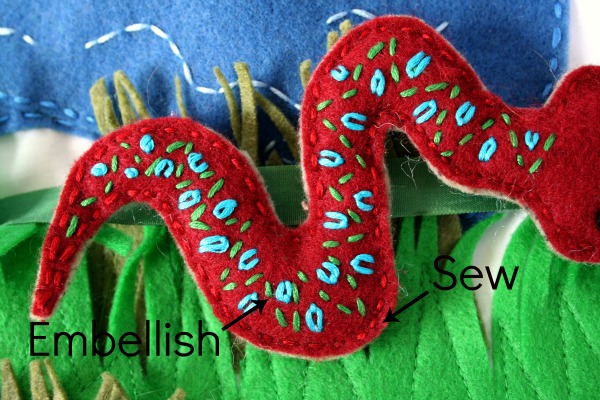 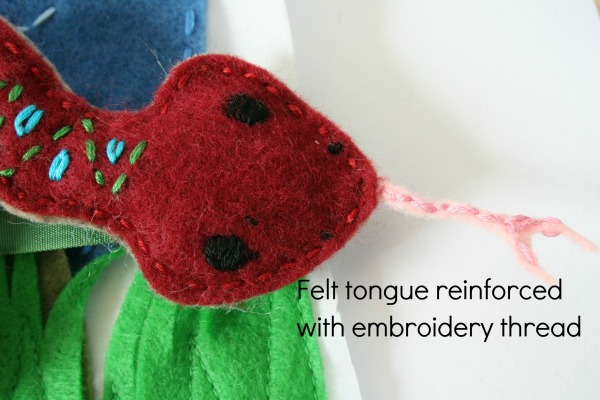 The viper is the easiest animal to construct.  Simply embellish the top and sew the two body pieces together, leaving a hole for stuffing.  Sew up the hole and knot off the thread! 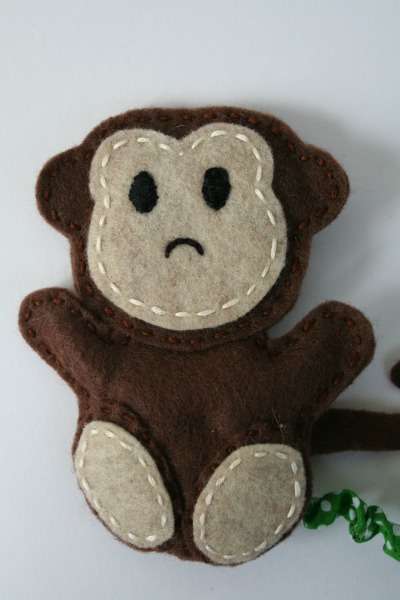 First, sew the eyes and nose onto the face.  It's a good idea to pencil in where you want your facial features to be so they are even.  Sew the face onto one of the head pieces and set aside.  Sew the feet pads (oatmeal colour) to the main feet.  I now realize that I didn't include the feet pads on the pattern sheets, so just cut out an extra set of feet and trim them down.  Sew each foot to one of the body pieces and set aside. 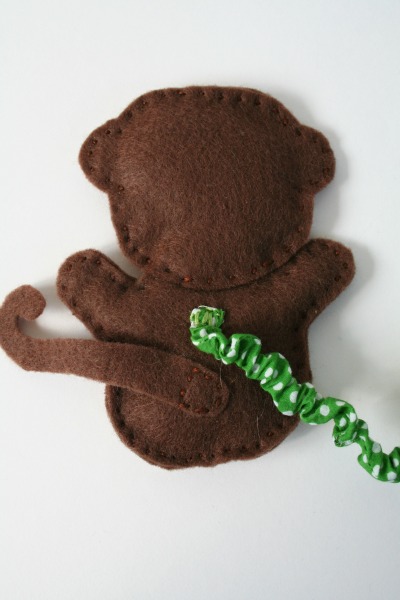 Using the second body piece, sew the tail on.  If you're going to be adding something to attach the animal to the quiet book, now is a good time to add that.  Sew the body: lay your body pieces on top of each other, wrong sides together, and starting at the 'neck' sew around the entire body and end at the other side of the neck.  Knot off the thread.  Leave the top open and lightly stuff the body.  Set aside.  Grab the to head pieces and starting at the 'chin' and sew up around the ears and head leaving the bottom open.  Do not knot off yet!  Lightly stuff the head.  Sandwich the head around the body and finish sewing.  Knot it and you now have a monkey!  As Rowan would say: "Eeee Eeee!" 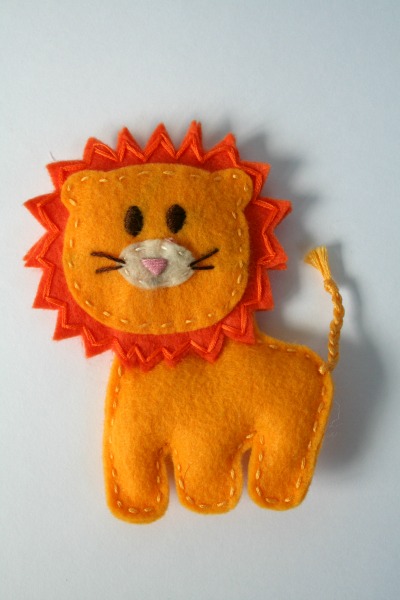 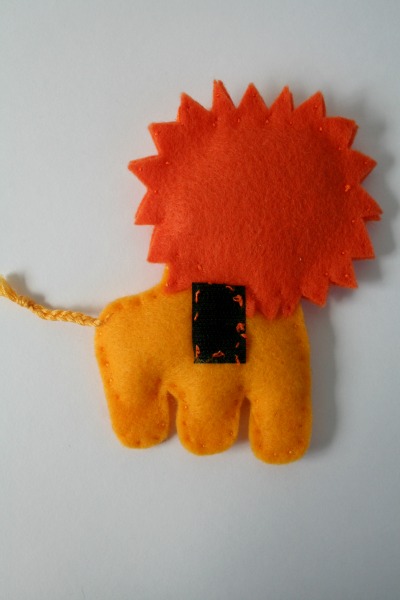 I didn't add the velcro to the lion until after he was finished.  Thus, the messiness.  Do as I say, not as I do. 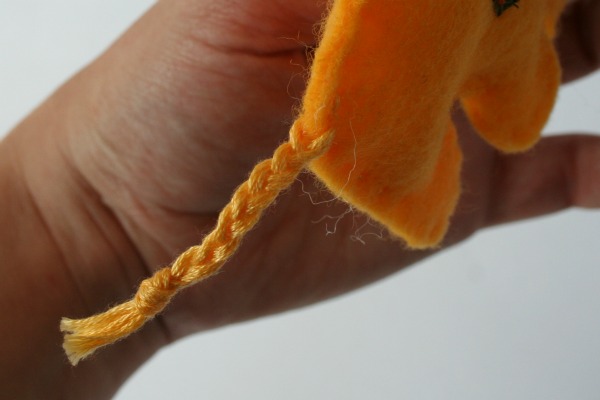 Construction for the other animals is pretty much the same.  For the tail on the lion and hippo, I threaded two long pieces of embroidery thread through the felt and divided them up evenly into three strands.  Braid your desired length and knot off. 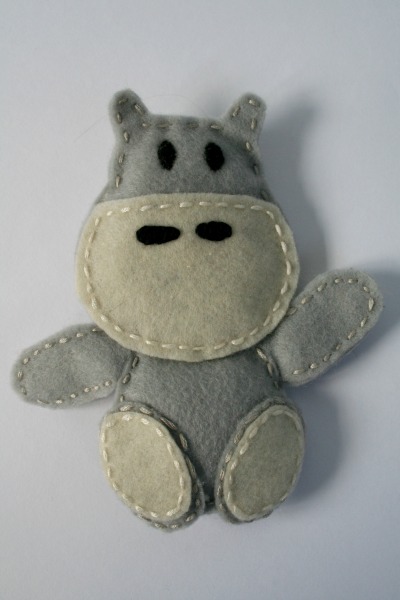 A note about the hippo arms:  they aren't stuffed and are sew together first before inserted and sewn to the body. 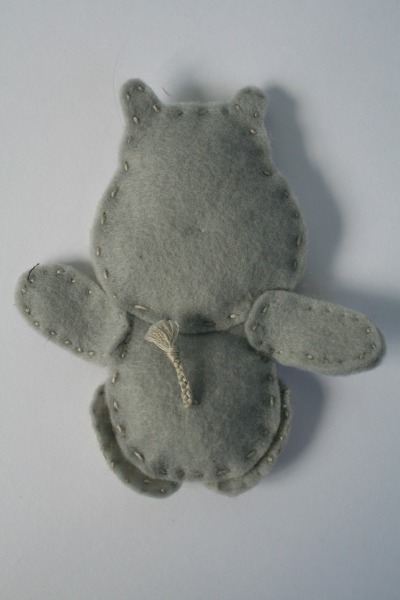 I had a lot of fun designing and sewing these little creatures, and I hope you enjoy making them.  I don't mind if you use the pattern for your own children or to give as gifts, but please don't rip me off and sell them.  That's so not cool.  If you're dying to sell them, shoot me an email about purchasing a license.

Sew on, my friends.

These are awesome. I love how much movement there is. Thanks for sharing.

Oh my WORD! I adore this page! Definitely going to make this - your animals are SOOOOO cute! And I love how you attached the monkey with the covered elastic - that is just genius. Just found you via Pinterest and now you have a new follower and avid fan :)

This is just too cute. To the felt store!

It's really fabulous. Thank for sharing.

I love your book! I just started mine and absolutely loved running into yours today :)

Hi,
I simply adore the safari animals. Am I being 'stupid' but although it says templates and tutorials, all I can find are the tutorials.
Where can I find the templates for these beautiful animals?
Michele Shaw

I adore this book! But I cant seem to find the templates...?

Dropped Search engines Best position or even Not able to obtaining Very first Pr. Probably the most issue at the rear of this really is replicate content material. Therefore, I'd like in order to recommend a person examine your own material aren't Plagiarized. Examine through Plagiarism Software

Wow, this is amazing. I fell in love with your work. One day I was bored and I was thinking I would like to do something with my hands. I know this is not an easy job. You are very talented. You can check for plagiarism your unique text on the blog.

I have just done my first quiet book and am very impressed with your work. You have inspired me to start my own blog!

Keep up the creativity on this book. My great grandson arrived the 1st of Nov. and his nursery theme is the jungle. This book, by the time I get it done, will be perfect for him. Thanks so much!!!!!

I love your quiet book felt safari animal page and would love to make this for my grandson. I can't find the template pattern for it on your blog. Would it be possible that I could get the pattern from you? It is one of the cutest ones I have seen. I love all the handwork you did on it. If you could let me know as soon as possible I would appreciate it very much. Thanks!

Assignment Dost
Worried about ‪homework‬‬‬ and ‪‎assignments‬‬‬?Don’t worry, here is the solution.
Get the best quality assignment at the lowest price. Timely service, quick response and direct
communication with the writer.
Assignment Dost

Promote Your Page Too